In this second blog, I will talk about other plants that were introduced during colonial times. Some of those plants were introduced for economic reasons, and continue today, to contribute to our national income. Others, like spices and fruits, were brought by eminent botanists, for the greatest benefit of our culinary traditions.

Sugar can was introduced from Java in 1639 during the Dutch settlement period by Governor Adriaan Van der Stel. It was first grown in the region of Ferney. Two sugar processing plants were established by 1641 but sugar production was abandoned by 1652.

The cultivation of sugar cane however continued for the production of arrak, an alcoholic beverage similar to rum. By then end of the 17th century Jan Bockelberg, a junior surgeon of the colony, produced both white and black sugar.

During the French settlement period, sugar cane production was re-instated under Governor Mahé de Labourdonnais and was successfully cultivated. Slaves were brought from various parts of Africa and from Madagascar to work in the fields.

In 1810, when the British conquered Mauritius, 10% of the island was under sugarcane cultivation. Sir Robert Farqhuar, the first British Governor felt sugar was an important asset for Mauritius and the area under cane production was further increased. The expansion of sugar cane slowed down in 1835 due to shortage of labour, following the abolition of slavery but the arrival of Indian immigrants relaunched production. New varieties were introduced, roads and railways were constructed to facilitate transport.

At the turn of the 20th century the sugar industry suffered from the fall in world prices. Reforms were undertaken and production was centralised and mechanised and the number of factories were reduced. Once the backbone of the economy, today the Mauritian economy is very diversified. Although sugar remains an important contributor to the economy, its share has largely declined. Producers have diversified into rum and energy production.

Two sets of postage stamps were issued on the theme sugar cane. The first was issued on 22 December 1969, to mark the improvements and innovations introduced by Charles Telfair, a British planter, for the sugar cane industry. In 1819, Telfair introduced the first horizontal roller mill capable of extracting more juice from sugar cane than before canes. Telfair is pictured on the Rs. 2.50 stamp. The 15 cents stamp shows a vertical cane crusher, used in the early 19th century, before technological improvements introduced by Charles Telfair. The 60 cents stamp shows the Beau Rivage sugar mill, as it was in 1867. The Re. 1 stamp shows Mon Desert Alma Factory in the background of its sugar cane fields in 1969.

On 10 January 1990 a set of 4 postage stamps was issued to mark the 350th anniversary of the introduction of sugar cane in Mauritius.

The set of stamps show different aspects of the production process, as follows:

(iii) The Re 1 shows the mechanical loading of sugar cane; and

The sugarcane plant also featured on the Mauritius Coats of Arms, and was represented on various postage stamps until it was replaced by the palm tree in in 1906. Indeed, the Coats of Arms design was first issued in 1895, representing a 3-mast ship, three sugarcane plants, a key and wedge and a star, called in heraldry, the pile and the mullet.  In 1906, under the administration of Sir Cavendish Boyle, the Arms were corrected because some elements of the designed appeared to be against the rules of the heraldry. A re-designed version was issued in 1910: the galleon was replaced by a lymphad (a galley – the caravelle), palm trees replaced the sugar cane; the key was flipped and the star became five pointed. The overall designed remained however the same.

Tea was introduced in Mauritius by a French priest, Father Galloys in 1760. However, under the French rule, tea production was not a priority and even the botanist Pierre Poivre kept it as a museum plant.

In the early 19th Century, Sir Robert Farquhar, British Governor of Mauritius, encouraged tea cultivation on a commercial basis but again, cultivation was abandoned when he left the island. The industry really developed under the leadership of British Governor Sir Pope Hennessy, 70 years after Farquhar. Plantations began at Nouvelle France and Chamarel. One of the pioneers was Raoul Corson. In the 1960s, it was decided to further intensify cultivation in the humid zones.

However, in the 1990s, due to competition from major producers in Sri Lanka, India and Kenya, production declined significantly. A number of plantations were converted into sugar production. Today, there are 3 tea factories, namely Bois Cheri, Corson and La Chartreuse. Production is mainly for domestic production and very few, high grade teas, are produced for exports. Producers have also diversified in ‘creative blending’ and herbal teas. Today, Mauritius produces about 20 varieties of tea and assorted products. 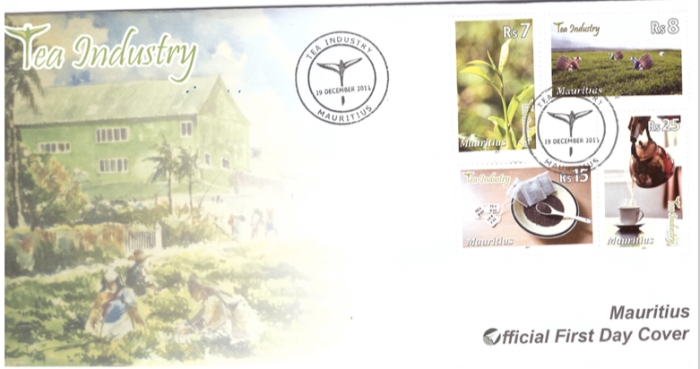 Tea is well anchored in the Mauritian culture and the average consumption of tea on the island is one kg. per head annually. Four postage stamps and a FDC were issued on the Tea Industry on 19th December 2011. The Rs. 7 stamp show a tea plant (leaves and bud); the Rs. 8 stamp illustrates the process of tea plucking, an activity still conducted manually; the Rs. 15 stamp shows tea as a product ready for consumption, once processing is done; and the Rs. 25 stamp illustrates tea beverage, once prepared and ready to drink.

On 1 December 2004, a set of 4 stamps was issued on the theme “Anthuriums”, a perennial herbaceous plant, originating from South America. The plants were introduced in Mauritius in the 19th Century from Europe.

The colours of anthuriums vary from satin white to morning-dew pink to frosted pink, and from bright orange to crimson-red. The leaves of the anthuriums are also heart-shaped, though wider in size. They are cultivated for their lasting flowers, which are produced throughout the year.

The four varieties pictured on the cover are of Dutch origin, mainly cultivated for the export market. They are: 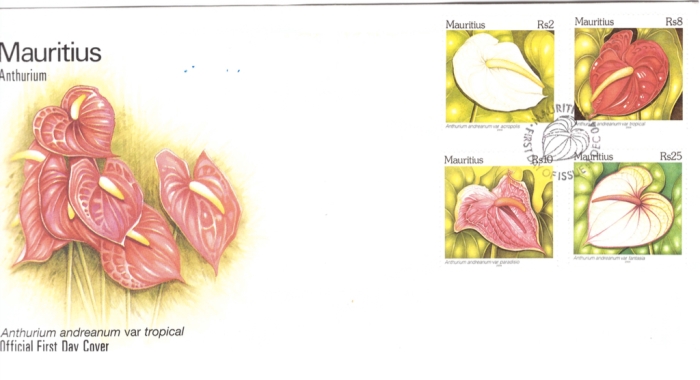 To some extent, Mauritius was discovered thanks to spices. In fact, Mauritius was an important port along the “Spice Route”, that is, the trade route between Europe and India along which lucrative spices were traded from the 16th century onward. Arabs, Portuguese, Dutch, British and French all crossed the Indian Ocean in their quest for those precious spices.

Pierre Poivre was the first to introduce spice culture in Isle de France, under French Rule to break the Dutch monopoly, notably following his visits to Indonesia, China, the Philippines, the Moluccas and Madagascar in the mid-1750’s.

He introduced spices such as pepper, clove, cinnamon and nutmeg. Poivre proceeded to cultivate these plants during a three-year stay on the island, transforming an old French East India Company nursery at Pamplemousses in north-eastern Mauritius into a formal botanical garden (now called the Sir Seewoosagur Ramgoolam Botanical Garden). It is said that Poivre introduced more than 600 rare plants into Mauritius and the Pamplemousses Gardens from around the world, like mango and breadfruit trees, cocoa, lychees, coconut palms, ebony and mahogany trees, laurel and camphor trees.

After the abolition of slavery during the English era, Mauritius saw the arrival of indentured labourers. Coming from India, these migrants brought with them other spices, such as saffron, star anise, turmeric and chili. Today, the country has a wide variety of spices, all used to flavour culinary preparations. 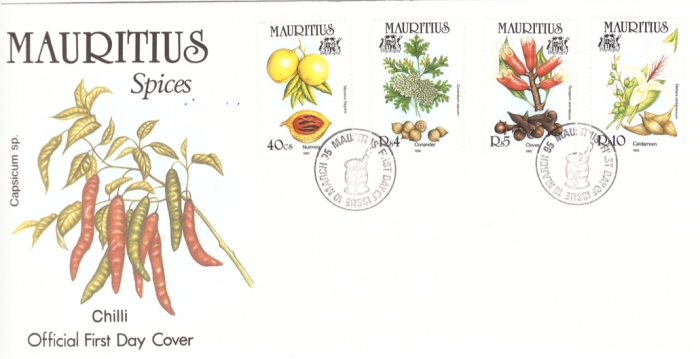 On 10 March 1995, a set of four postage stamps on spices forms part of the Nature series of Mauritius.  Though none of the spices portrayed in this set is endemic, they have been adopted and adapted by all. The four denominations are:

Mauritius has a wide variety of exotic fruits, most were imported from various botanists that visited Mauritius over the years. A set of postal stamps features four different types of edible fruits was issued in 1997: 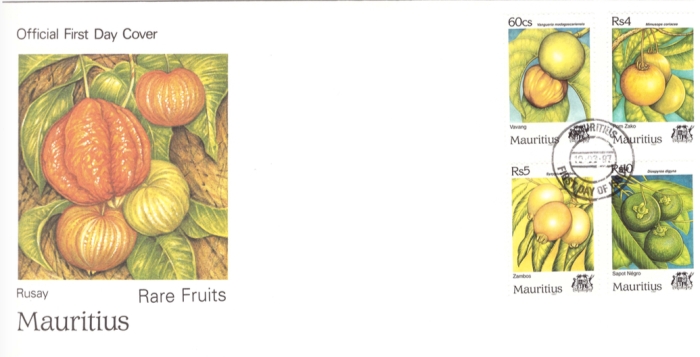 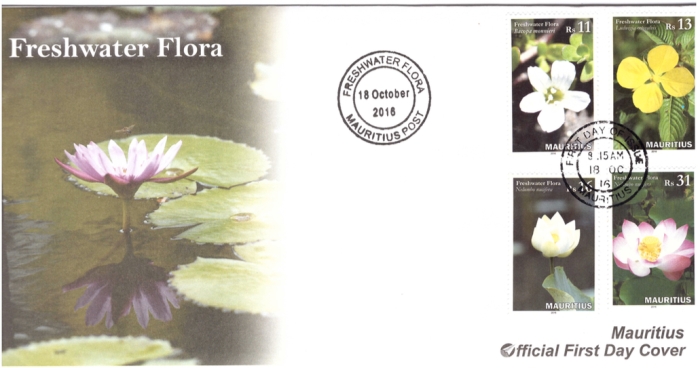 A set of 4 postage stamps was issued on 18 October 2016 on the theme “Freshwater Flora”: