This new blog series features birds (and flying mammals) species from Mauritius: endemic and those brought in over the years. This first blog in the series looks at some endemic bird species that are featured on stamps.

There is a total of 119 bird species in Mauritius, of which 15 are endemic (11 in Mauritius and 4 in Rodrigues) and 25 are indigenous species. Sadly, about 15 known species are now extinct. They are (the scientific name and approximate extinction date are shown in brackets):

The 4 extinct species of Rodrigues Island are:

Scientists confirm that the dodo lived for thousands of years on the island of Mauritius. The bird was made extinct before the end of the 1600s by the introduction of men and various animals such as pigs, deers, rats, monkeys, cats and dogs. However, it was difficult to imagine what it looked like. We had to rely on drawings and paintings, in particular the one printed in an edited version of Admiral Cornelius van Neck’s journal published in 1601, after visiting Mauritius in 1598.

Both stamps  show the Dodo and a map of Mauritius. The King George VI 12 cs stamp shows the latitude incorrectly as 21° 10´ (instead of 20° 10). This ‘error’ was corrected when the same design stamp with the head of Queen Elizabeth was issued in 1954.

The dodo also features on our Coats of Arms and was the mascot of the “Jeux des Iles de l’Ocean Indien, organised in Mauritius in 1985. 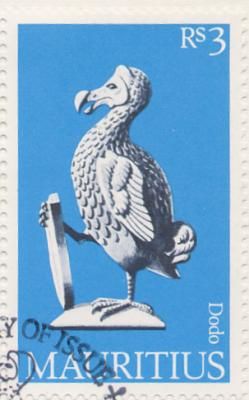 25 June 2007: The Dodo finally gets its own Official First Day Cover

It is only in 2007 that a set of postage stamps/ souvenir sheet issued by the Mauritius Post portrayed different representations of the Dodo, through drawings and paintings of various artists at different times.

The FDC is a reproduction of the Dodo’s head from a bronze statue situated at Ile aux Aigrettes.

On that occasion, a souvenir sheet was also released

The souvenir sheet shows a nice painting by Julian Pender Hume, a paleontologist and painter. It shows a reconstruction of endemic fauna of Mauritius.

On 16 March 1965, a set of 15 postage stamps was released. They featured a selection of endemic birds of Mauritius and Rodrigues. Of the 15 stamps, 5 are sadly extinct.

The series include the 10 living birds, some of which are considered as endangered and vulnerable. They are subject to a vast programme of conservation and protection, which helped to save the most vulnerable of them. These are:

A set of 4 postage stamps was released in 1967, one year before independence on the theme birds of Mauritius.

The stamps feature the following birds:

In 1968, six stamps of the 1965 bird issue were re-printed, in different colours as shown in the unofficial FDC below.

The Mauritius kestrel (Falco punctus) is a bird of prey from the family Falconidae, endemic to the forests of Mauritius, where can only be found on the Western plateau’s forests, cliffs and ravines. It is the most distinct of Indian Ocean kestrels.

It is a relatively small bird, of a size between 26 and 30.5 cms, for a weight of about 250 grams. The males are slightly smaller than the females. Their wingspan is approximately 45 cms and their wings are rounded, unlike other falcons. They can live up to 15 years in captivity. The Mauritius kestrel is carnivorous: it eats  geckos, dragonflies, cicadas, cockroaches, crickets and small birds.

As from the 1960s, with the increase in population, deforestation and the introduction of chemical fertilisers, such as DDT (to eliminate malaria for ex.), the population of kestels declined sharply and the species became critically endangered. The recorded population dropped to an all-time low of only 4 individuals in 1974 and it was considered the rarest bird in the world. With the support of the Wildlife Foundation and various institutions, a vast programme of conservation was undertaken in the 1980s.

The Rs. 5 stamp released in 1978 as part of a set of 4 postage stamps, and featured on individual covers on the below WWF cover honours the Mauritius kestrel, one of the rarest birds in the world.

A predatory bird, the kestrel hovers in the air over open fields while it searches for mice, moles, lizards or shrews. When it sees its prey, it will dive steeply downwards, grasp the small animal in its talons and swoop away to a nearby perch to devour it.

Also on 26 March 1984, the Mauritius post released an official first day cover on the Kestrel Issue

The four stamps show the following:

The pink pigeon (Nesoenas mayeri) or pigeon des mares, is a species in the family Columbidae, and is endemic to Mauritius. Habitat degradation, introduced predators, and wildlife disease are the major ongoing threats to the pink pigeon’s survival. The pink pigeons were critically endangered in the 1990s, when only 10 individuals had been recorded and are still considered as very rare. It is the only Mascarene pigeon that has not gone extinct.

Will extensive support from the Durrell Wildlife Conservation Trust since 1977, the number of pink pigeons have substially increased. In 2011, there were about 500 birds.

The World Wild Life Fund released also a set of individual covers, official proof editions as well as maxi cards to mark this special edition. They are all featured below.

The echo parakeet or Mauritius parakeet (Psittacula eques, also known as grosse cateau verte) is an parrot endemic to Mauritius. It has dark green plumage with a black collar. Males have a red beak whereas females and juveniles have black beaks. It is arboreal, usually found in upper tree branches. Feeding during the day, it mainly eats fruit and flowers, supplemented by leaves, seeds, buds, shoots, twigs, and bark; more leaves are eaten in the winter when fruit is scarce.

The population of the Echo Parakeet  began to decline in numbers and range in the mid-1800s. By 1986 the population was estimated to be 8–12 individuals. The present wild Echo Parakeet population is restricted to an area of less than 40 km2  of remnant native upland forest within the 6,800 hectare Black River Gorges National Park.

The survival of this species is threatened by the limited availability of natural nest sites and food, competition from exotic birds such as Indian Mynahs and Indian Ring-neck Parakeets, predation by introduced mammals including Ship Rats and Crab-eating Macaques, and disease.

On 18 March 2003, a set of 4 postage stamps showing echo parakeets was issued. The echo parakeet endemic only to Mauritius was very common in the 18th and 19th century, but gradually disappeared, as was close to extinction.

The stamps depicts on:

With the support of the Wildlife Preservation Trust in 1987, a full scale programme was launched to carry out captive breeding to save the specie. This set of 4 enveloppes have been published by WWF, along with the set of 4 maxi cards, featured below.

Bats of Mauritius and Rodrigues.

Bats are not birds, but mammals. In its series on Mauritius wildlife released on 21 September 1978, the Rs. 1.50 stamp features the Mauritian flying fox.

In 1978, the WWF cover honoured the the flying fox, a large fruit bat, indigenous to the Island of Mauritius. These mammals, with their sharply pointed foxlike snouts are features on the stamp and on the original engraving on the envelope.

The diet of the flying fox consists entirely of the juice of sweet, aromatic fruits such as mangos, papayas or litchis. The flying fox can have a wingspan of over 5 feet and is covered with dense, variably covered fur tinged with dark brown. They measure up to 16 inches and have very large eyes with keen eyesight. The claws on their index finger as well as on their thumb allow the bats to cling to tree branches while sleeping. Sometimes, if the night air is cool, they wrap their wing membranes tightly around their bodies. When the temperature rises however, the wings open and gently fan the air. This their body temperatures remain relatively constant.

Active mainly in the evening and at night, prefer high trees as resting places. At rest, the flying fox is a gregarious animal, often roosting in large groups.

The Rs 14 stamp represents the rousette of Rodrigues (Pteropus rodricensis) a fruit bat, now only found in Rodrigues. The population of the bat has declined rapidly making it a critically endangered specie. An education programme to raise awareness about conservation of the bat was very successful

TheRodrigues Rousette was featured on an amazing maxi card, released by the Birdman of Mauritius, with the Rs. 14 stamp of the Fauna and Flora series, released on the same day as the official first day cover.