Part II of this blog is dedicated to ships and the role they played in the modern socio-economic development of Mauritius.

When Mahé de Labourdonnais became the Governor of Isle de France, among other things, he built the city of Port-Louis and transferred the capital and the harbour there. Since then, Port Louis Harbour has played a key role in trading and  economic activities, as shown in the 75cs from 1970 Stamps series “Port Louis Old and new”. 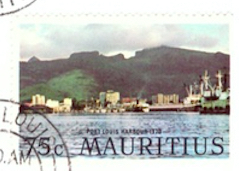 In 1996, a new set of 4 postage stamps was issued. The four ships depicted on the stamps are associated with various activities, namely trade, transport and administration of the modern Port-Louis Harbour. The set of stamps consists of (i) a 60 cs stamp, portraying SS Zambezia at the jettyo f Diego Garcia, Chagos Archipelagos, a ship built in 1903, used to carry commercial goods and animals such as cattle; (ii) Rs. 4 stamps, showing MV Sir Jules, especially built to sail between the Chagos Archipelagos and Agalega for copra trade (iii) Rs. 5 stamp, showing MV Mauritius at Quay C at Port Louis harbour. MV Mauritius was built in 1955 and used to carry passenger, cargo and livestock across Indian Ocean islands; (iv) Rs. 10 stamp shows MS Mauritius Pride at Port-Mathurin, Rodrigues, a multi-purpose vessel, which replaced MV Mauritius in 1990. It carries passengers, cargo, containers, edible oil and fuel oil in cargo tanks. The envelope cover shows Port-Louis harbour. 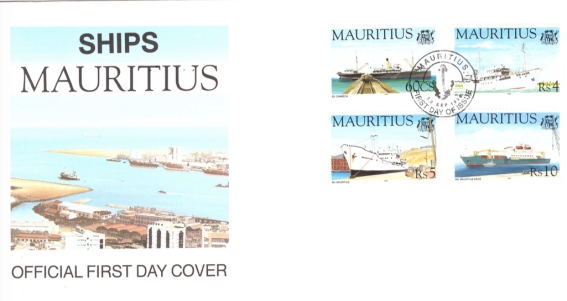 To further illustrate the growing role of the harbour, a R. 1 stamp, part of a 2002 series marking the 10th Anniversary of the Republic illustrated cargo handling activities in Port Louis  Harbour.

In 2011 a special commemorative cover was issued  to mark the 35th Anniversary of the Mauritius Ports Authority (MPA), formerly known as Mauritius Marine Authority. The MPA regulates and controls the port sector and provides the main port infrastructure and other related services. The cover features a picture of Port-Louis from 1935. 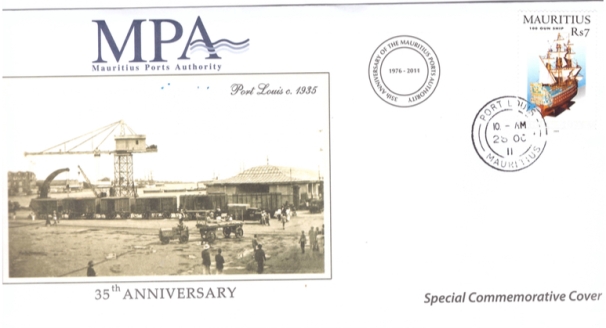 To commemorate the 40 years of the Maritime wing of the Mauritius Police Force, a Special Commemorative Cover was issued on 7 April 2014. It celebrates 4 decades of pride, valour and solidarity (the motto). Since its creation in 1974, a number of patrol boats ensured the surveillance of Mauritian waters. The Cover shows the Coat of Arms, with the motto Pride, Valour and Solidarity. The medallion shows Poseidon, the God of the Sea. Four different types of patrol vessels are pictured on the cover. The Rs. 7 stamp is from the Bicentenary of Mahebourg series of 2006, showing Regatta. 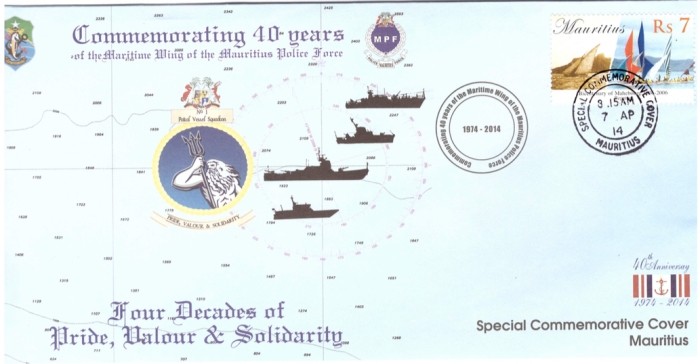 Other important use of boats in Mauritius include inland transport for sugar, fisheries and tourism, amongst others.

Less known to the public, boats were used until 1950 for the carriage of sugar from factories to Port-Louis but disappeared because with the advent of diesel lorries, they became too expensive. A Rs. 10 stamp, issued in 1998, commemorates this activity, with a stamp showing a coastal barge unloading sugar at the Coaster’s Wharf in Port-Louis in the 1940s.

Fisheries as a living

The fisheries sector continues to be an important contributor to national income. The  2cs stamp of the 1950 King George VI definitive series and the 2cs stamp of the 1953 Queen Elizabeth definitive series, both show the same daily scenery of fishermen in Grand-Port, one important economic activity of this part of the island, at the time. In 1987, in the ‘Bridges” series, the Rs. 2.50 stamp also features a fishing boat close to Cavendish Bridge on Rivière la Chaux in Mahebourg. 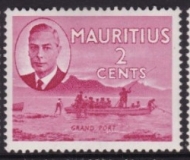 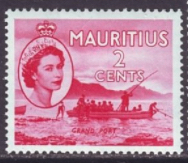 In 1983, a set of 4 postage stamps, featuring fishery resources was issued. They show various fishing activities, including trap/ pot fishing, big game fishing with a blue marlin catch and the drying of octopus, a  activity typical of Rodrigues island. 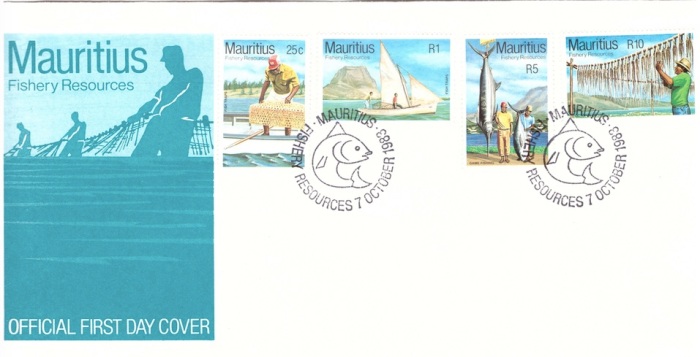 Fishing activities also led to other occupations, notably boat construction and repars. In 1997, commemorating those “petits métiers”, a Rs. 5 stamp was issued, showing a shipwright (charpentier pirogue), giving a finishing touch to a small fishing boat. The scene was typical of fishing villages, where boat construction was done under banyan trees on the beach.

The tourism industry is another main contributor of the Mauritian economy. In 1970, the country had about 18,000 visitors  and in the last few years the number of visitors reached almost 1 million annually. The first stamp to illustrate tourism in Mauritius was issued in 1970. It is a 60cs stamp, showing a scenery with tourists and boats by the beach. In 1985, a set of 4 stamps was issued to mark the 10th Anniversary of the World Tourism Organization, of which Mauritius is a member. The Rs. 10 stamp shows a small fishing boat in the north of the island, with the island Coin de Mire in the background.

In 1987, the then Minister of Tourism, Sir Gaetan Duval, organised the first Festival International de la Mer, to promote Mauritius as a tourist destination. A number of activities were organised, among which a Regatta race in Mahebourg (pictured in the Rs. 1.50 stamp), which is still organised. 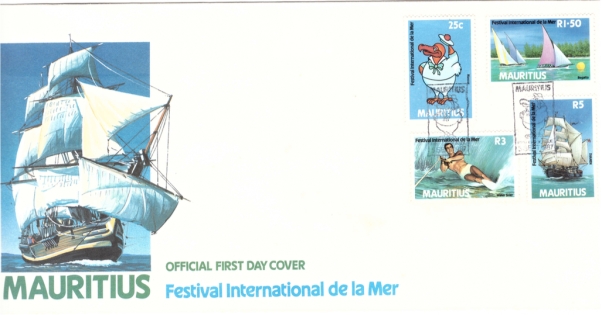 The production and sales of reduced ship models  is another economic activity, geared in particular to tourist customers. In 2005, a set of postage stamp was released to highlight this very important aspect of the tourism industry in Mauritius. Mauritian artisans have a high quality workmanship and have gained a wide reputation in this sphere. The set comprises of 4 stamps; one souvenir sheet; and a set of 5 postcards (representing each of the ships pictured on the stamps. (i) Rs. 7 stamp shows a 100 gun warship, built at the end of the 17th century, one of the most decorated in the world, a tribute to Louis IV, the “Roi Soleil”; (ii) Rs. 8 stamp represents a sampan. The Chinese had reached such a state of perfection in their shipbuilding technique already 2000 years ago. It was revolutionary in two aspects: the stern hung rudder, which was used centuries before the Europeans; and the sail made of small sections of cloth stiffened by light bamboo battens; (iii) Rs. 9 stamp shows a Roman Galley, used by the roman empire to ensure the domination of the whole mediterranean sea; (iv) Rs. 16 stamp features a drakkar, a viking long ship decorated with fearsome dragon’s, snake’s or lion’s head, which was detachable. The vikings believed that they should not enter their home shores with these heads so as not to offend the spirits protecting their tribes. 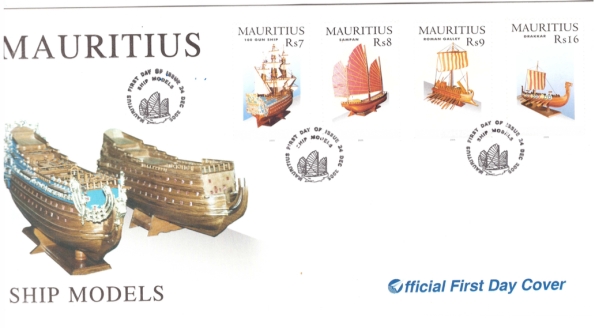 Last but not least, as an island, water sports are an important leisure activities. As mentioned already, regattas are regularly organised in Mahebourg and in Grand Gaube, two major sites for the lovers of sailing according to local traditions. Regatta involves mainly the traditional local pirogue, a boat that has evolved from the 18th century French chaloupe. The pirogues are usually made of wood known for their resistance to splitting. The regatta tradition started in the south of the island in the 19th century. The 1987 Festival International de la Mer and 2006 Bicentenary of Mahebourg stamp series, respectively features regatta races on. 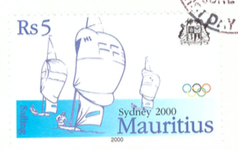